Today, the great majority of Raphael’s works in the Uffizi exist thanks to the Medici art collections of the early 1500s to the early 1670s. It is therefore possible to assert that this Florentine family had a particular taste for Raphael’s works. However, not all the paintings collected in that time reflect the Medicis’ artistic interests, as many of them came from expropriations or bequests and inheritances. Despite this, one artistic genre, more than others, appears to be particularly representative of the Medici family’s interest: the portrait. The aim of this paper is to identify some trends concerning the Medicis’ taste in the portrait and self-portrait. In doing so, three artworks – preserved in the Gallerie degli Uffizi – will be examined here: the Portrait of Leo X with Cardinals Giulio de ‘Medici and Luigi de’ Rossi; the Portrait of Tommaso Inghirami, known as Fedra; and Raphael’s self-portrait. These examples show how the artistic execution of Raphael’s artworks, or their later inclusion in the Medici collection (following Raphael’s death), depended on two main Medici personalities, namely Leo X and the prince and cardinal Leopoldo. Moreover, such portraits also reflect the three main recurrent circumstances under which works would usually be included in the Medici collection. The first concerned the creation of the artwork through a direct relationship between patron and artist (and, here, reciprocal incentives from one to the other can be seen). The second had to do with a consolidated taste of the Medicis in creating a collection of artistic portraits and, here, the acquisition of the artwork perfectly reflects this artistic taste. In the third case, we will see how the desire for a complete collection of artistic self-portraits sometimes brought the collector to acquire artworks that did not exactly correspond to their tastes. 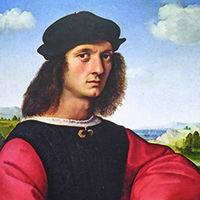